According to a Chinese law in effect since 1997, subnational entities, like cities and provinces, can't have their own flags, with exception of SARs (special administrative regions), apparently. Some of main minorities in China, although, has historical or political flags to be identified with: Tibetans (Tibet), Mongols (Inner Mongolia), Manchus (Manchuria), and Uyghurs (Xinjiang, a.k.a. East Turkestan or Uyghuristan). It's not the case of Zhuang people, based in Guangxi Zhuang Autonomous Region.

Zhuang people is animist, and related with other people in Southern Asia. I pre-selected silk balls and copper drums to be used in my flag, as typical elements, and the last was the winner, for being used in cooking, music, war and rituals. A typical Zhuang copper drum is presented below: 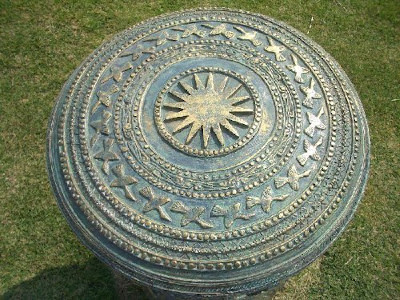 I so worked to colors that could look good and symbolizes copper at same time, and result was this: 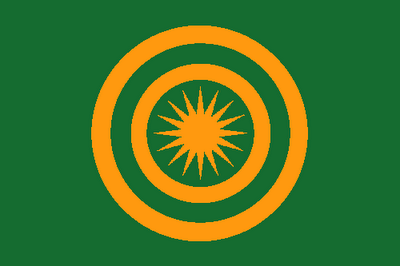 The sixteen-pointed (?) star seems to be a repeated theme in this copper drums, so it was used. Dark green and orange was the chose colors, because they look like the one of copper, and because green, in Chinese culture, represents harmony and prosperity. I'd like to use red, that means south, but I hadn't the opportunity.

I'm sad Indian and Chinese governments aren't friendly to regional flags, because I can see a great vexillological horizon to these parts of world.
What's your opinion about the flag? Comments are greatly welcome!
Posted by Leonardo Piccioni at 7:04 pm