I like very much Norwegian local flags. But, unfortunately, the capital has one of few questionable flags there.

The flag of Oslo looks more or less like this: 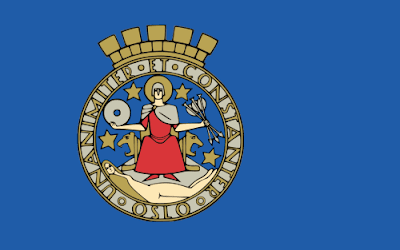 Between 1924 and 2002, Oslo used a more interesting flag, whose symbolism is unknown to me. This flag was substituted by the flag above, because the previous flag was supposedly too similar to Greek similar, what I disagree. 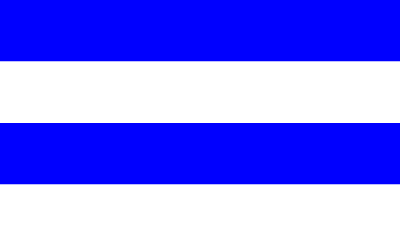 However, avoiding the same discussion, I'll propose a fix based on current flag, not the previous one. My proposal is, basically, adapt the current flag into Norwegian subnational flag style, that includes minimalism and respect for heraldic rules. Here it is: 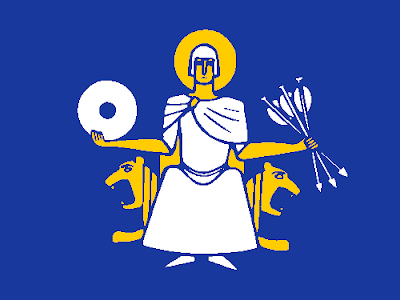 This flag, like Oslo seal, with medieval origins, represents patron saint St. Hallvard, holding arrows and a millstone, the instruments of his martyrdom. I've added the throne with lions, that can be associated with the role of Oslo as capital of Norway. I've removed the stars, whose symbolism, if any, is unknown to me, and the naked woman, that seem to be a later addition.

In general, I like very much the result, and I modestly think it could be adapted into a coat of arms.

Comments and suggestions are welcome.
Sorry for the absence last week. I've made stuff, but I've had no time to post it.
Posted by Leonardo Piccioni at 3:17 pm No comments: Links to this post