In Canada, the discussions about a possible flag change are very polemic, dividing people between pro-change and anti-change. One of bigger reasons to change (I'm not saying it's my personal opinion) is that, while Canadian population is basically constituted by Anglophones and Francophones, only the firsts are represented in the flag. 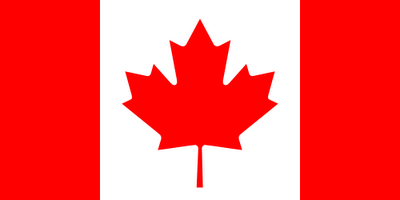 The original meaning of Canadian flag says white is for the French heritage (this color was used in French royal emblems for centuries) and red is for the British, but usually white is considered a neutral flag, so Francophones aren't represented. Therefore, more embracing flags are sometimes proposed. Between them, the most famous is the unofficial "Canadian Duality Flag" or "Canadian Unity Flag", created during 1995 Quebec secession referendum (obviously, by "no" campaign). It consists of Canadian flag with added blue bars. Blue was a color used in flags used in French colonies in America (see example). This is the mentioned flag: 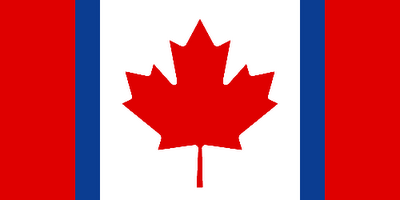 The main virtue of Canadian national flag is simplicity — that "duality flag" ruins. The blue touching the red is neither a good choice. So I come with a new flag proposal to represent the Canadian British-French duality: 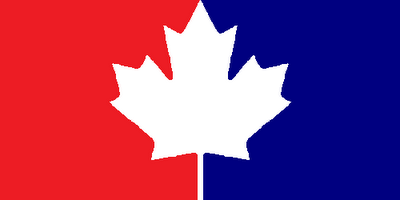 The red represents the British heritage, and blue represents the French heritage. The maple leaf is dividing the flag, and it's white because it means peace. The red is not touching the blue, what improves a lot flag's visibility. The position of the colors is based in the principle that French population is concentrated in the east. See the map (darker means bigger Francophone population): 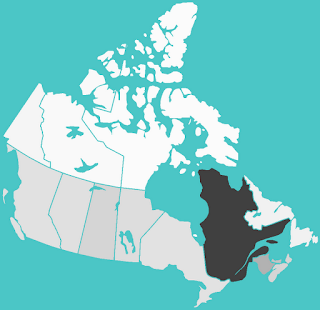 Also, it opposes the French national flag's color order, to avoid any misinterpretation. Finishing, I'd note that it's more a proposal to a new "duality flag", although it could, occasionally, be proposed as Canadian national flag, what I didn't pretend to do at the moment.

Your comment is always welcome. Please feel free to express your opinions. Thanks for reading! If you liked the blog, you may like to follow it (button is on the left).
I'd like to clarify that it's not my intention express any political opinion in this post.
Posted by Leonardo Piccioni at 2:16 am 3 comments: Links to this post

My friend Samuel McKittrick designed a flag to its own city, Londonderry (as unionist usually name it) or Derry (as nationalist usually prefer), the second biggest Northen Irish city (see the post here). It's going to be the first UK City of Culture, in 2013, so it's a good time to build a flag. Just above you can see two flags: the first is the unofficial city council's flag and the second is my favorite Sammy's proposal. 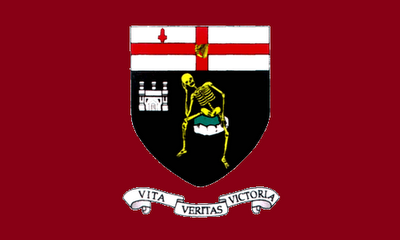 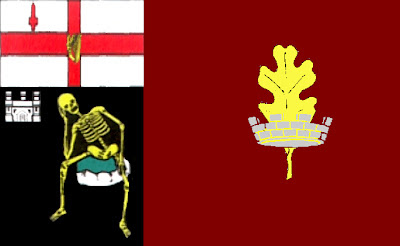 Let's explain them: the first flag depicts the coat of arms, also symbolized in second flag. It depicts a skeleton (or the Death) on a stone with a castle in left. The real origin of the meaning is unknown, but it's popularly said to represent the castle of the 2nd Earl of Ulster, Richard De Burgh (1259-1326), being the skeleton from one of his knights and cousin, starved to death on castle's dungeons. In the chief (top of shield) there's London coat of arms (sometimes with a harp on center), added when city changed its name from Derry to Londonderry.

The field of both flags is a crimson, representing the crimson flag, firstly flown during the Siege of Derry (1689) as symbol of defiance. Sammy's flag contains badge with a oak leaf and a stronghold, taken from a memorial in Guildhall square. The oak represents city's origins and name (Doire means "oak grove" in Irish). The bastion is a reference to the city's insurmountable walled city (hence city's nickname "maiden city").

Based in this flags, I made my own proposal to Derry's/Londonderry's flag: 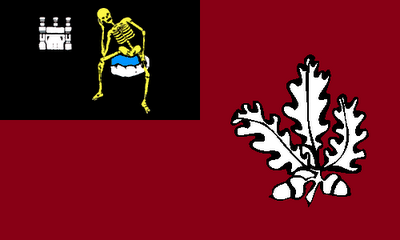 In the first flag, the coat of arms. I didn't use the London banner of arms to avoid somebody concluding that city has any formal relationship with the English city. The field is crimson, the same shade of flags above. I use the same oak leaves from Doire team in GAA (Gaelic Athletic Association). I'm not still 100% satisfied with the flag, but still think it's reasonable. I tried a half-half version of flag, instead of a "cantoned" one, but that didn't work, for me.

Some months ago, I tried to contact the prefecture of Natal municipality (in Brazil, it's equivalent to a city) to notice problems in city's coat of arms and, consequently, flag. The prefecture's e-mail bot generated an error, and I couldn't deliver the report I write. I'll resume it to you, but firstly let's see the Natal flag: 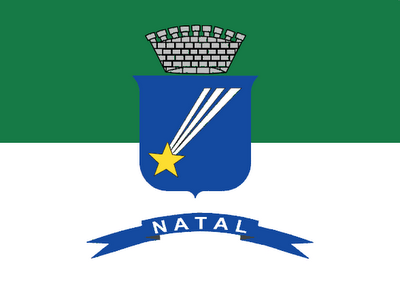 The coat of arms of Natal has a immediately noticed meaning, and I think it's good: "Natal", in Portuguese, means "Christmas", a reference to the date of city's foundation, so it depicts the Star of Bethelem. There are some errors, accordingly to Brazilian heraldic rules, and, guaranteeing it's not a replication error, the image was took from city's governmental website, although it's seen, in the same way, in many other sources. Here's a list of rule breaks I noticed:


Specifically in the flag, I would suggest the change of green tone to the same used in Rio Grande do Norte state flag. Applying this suggestions, I created two proposals: one without the motto, what's vexillologically recommended, and one with it, as commonly the coat of arms are depicted in Brazilian flags. 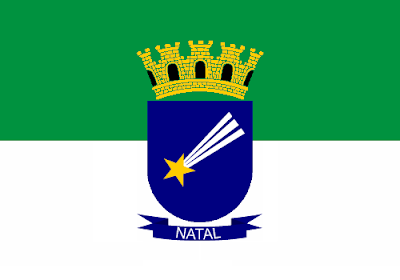 And a bonus flag: why not a banner of arms? 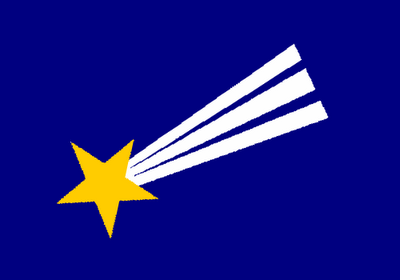 Finally, I'd like to note that, while some cities and states follow rigorously the Brazilian heraldic rules, most probably the bigger part of them doesn't.

If you want to give any kind of comment, feel free to do it. I'd be pleased.
I'll try again later send the letter to the prefecture. If I obtain success, I'll inform it on the blog.
Posted by Leonardo Piccioni at 4:07 am 1 comment: Links to this post

Not many British cities have their own flags. And this week I was verifying this fact, when I decided to create one of them by myself; I chose Liverpool, the third most populous English city, just after London and Birmingham.

I selected two ideal symbols to Liverpool: the Mersey and the Liver bird. The River Mersey is a significant element of Liverpool landmark, and names the region where the city is located: "Merseyside". The liver bird has been a symbol of Liverpool existent for centuries, but only popularly adopted in Modern Times. But what's a Liver bird? Most probably an eagle, possibly a cormorant, sometimes misunderstood as a phoenix or a griffin (read an interesting article about this issue). The polemic is big: the Liverpool City Council  coat of arms uses a cormorant, while the Liverpool Anglican Diocese coat of arms holds an eagle. The Liver bird I used is the most popular form, also seen in Liverpool City Council logo (actually, I used the one in Liverpool FC logo). See it below: 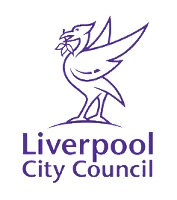 A important point about aforementioned logo is that it's purple, neutral in relation to the colors of biggest football teams of Merseyside: the Liverpool FC red and Everton FC blue. Therefore, purple is the main color in my flag proposal: 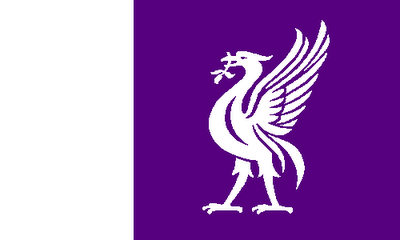 The white pale refers to Liverpool position right of River Mersey. The other element of flag, as I said, is the traditional Liver bird.

Do you want to give your opinion about the flag or the post? Leave your comment, please.
Sorry if I didn't post it before, but I had problems uploading the images.
Posted by Leonardo Piccioni at 4:13 am 3 comments: Links to this post