DROPS: The roundel of Brazil

I'm very busy this week, so I decided to make drops about the aircraft roundel of Brazil, or more specifically about the question "What if Brazil had only one roundel?".

Why the question? Look: 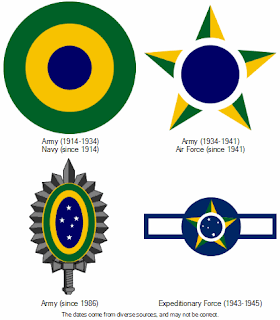 There isn't something like a single unified roundel on Brazil. The original roundel of Brazil, inspired by national cockade, is used on navy's aviation. The air force itself use one design inspired on Brazilian coat of arms. The army's aviation use the insignia of the Army on the wings of its airplanes. A fouth roundel was also used on Brazilian history: the Brazilian Expeditionary Force, that represented the country of World War II, used a design inspired in USA roundel, to help the identification between the Allies, and this design could be reused on a future war.

My proposal is a mix of the first roundel (current Navy's roundel) with the current one. Summarizing, I put the current roundel on a green disc (I like round "roundels") and changed the color of outer disc of current insignia from white to yellow, what incidentally also remember Army's roundel. This design, therefore, can be used by the three armed forces and is still distinguishable on low visibility, what's fundamental to all aircraft insignia. Here you can see it: 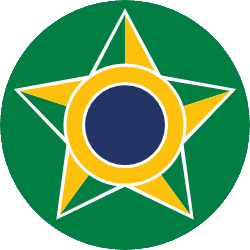 Your comments are welcome.
The colors of the roundel will be theme to next drops. Wait it!
Posted by Leonardo Piccioni at 2:28 am 1 comment: Links to this post

I recently knew about a unofficial campaign to the adoption of a flag to the city of Gloucester. I've sent my proposal to newspaper, hope they'll publish it.

Gloucester don't have a flag. The city council reportedly fly, even if rarely, a white cloth (of 1:2 ratio) with city's coat of arms on center. Even if this flag has official status (I suppose the opposite), its use should be restricted to the council. The newspaper, on other hand, proposes a flag to be flown by the citizens, observing the recent relaxation for the rules about flags on England. The reported flag is something like this: 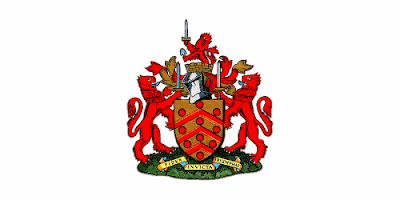 Based on the coat of arms, my proposal is the following: 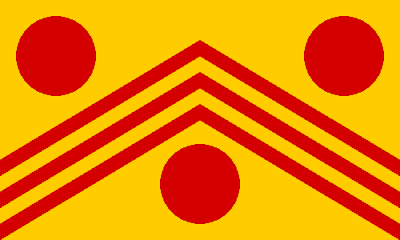 After research, it seems that city's coat of arms is inspired by the arms of De Clare family (that were the original earls of Gloucester), with torteaux (heraldic term for red roundels) believed to come from the arms of the see of Worcester (although a separated diocese of Gloucester exists since 16th century).

My design arranges the three chevronels of De Clare in more traditional way, putting the red torteaux on remaining space (many arms also inspired by diocese of Worcester's also use less torteaux). It's still recognizable, but it's much more adequate to flying on a flag, as it's easier to be hand-made and can better be distinguished on high wind (the council's reported flag could be confused with any other white flag with a coat of arms on it). My design is not copyrighted, and fits the recommendations of British Flag Institute.

Your comments are welcome.
Sorry for the slight delay for posting this week.
Posted by Leonardo Piccioni at 2:45 am No comments: Links to this post

A thread on Flags Forum gave me the idea to resurrect an old sketch I made to represent the Celtic League but de facto all the pan-Celtic movement i.e. the supporter to bigger contact between the "Celtic nations".

There isn't an official pan-Celtic, but two flags are most commonly used. This is the most popular: 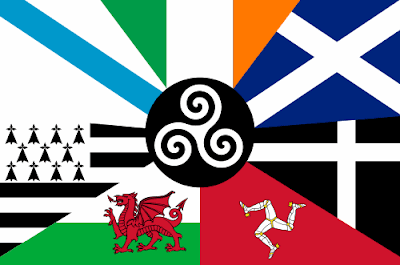 This flag is made with the amalgamation of flags of seven Celtic nations, from top left, in clockwise direction: Galicia, Ireland (in this case, not only the Republic of Ireland, but in a pan-Irish context), Scotland, Cornwall, Isle of Man, Wales and Brittany. Other common variant have only the six original celtic nations, removing Galicia. In the center, a triskelion, a motif common in celtic art.

The other one is a proposal by Robert Berthelier in the 1950s: 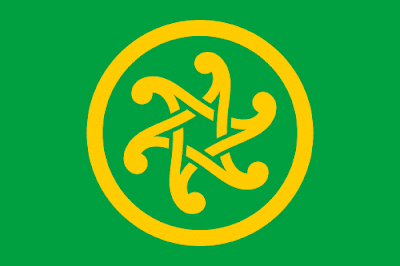 This flag have green and golden yellow colors, commonly associated with the Celts, and two conjoined triskelions (in the style of a celtic knot), representing three Gaelic peoples - Scot, Irish and Manx - and three Brittonic peoples - Welsh, Cornish and Breton.

The sketch that I had (as said in first paragraph) is heavily influenced by Andrew Boada's amazing "Irish Celtic Cross". Here is it: 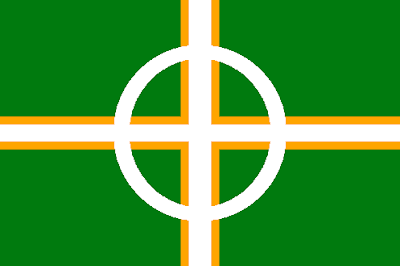 This flag has the same colors of the Berthelier's proposal, with the addition of white. It represents a Celtic cross, but touching the borders instead of square as the latter is used by Neo-Nazis. I like how this flag is simple and vivid. But, to avoid any misconception, I made the reference to celtic flag much more subtle on my next proposal: 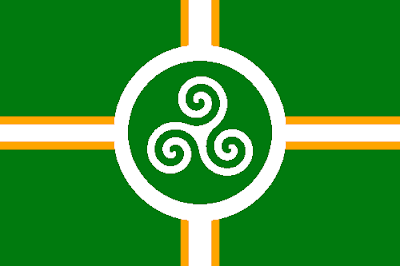 It's very much like the anterior flag, with the exception that a white triskelion was added on the center of the flag.

As you can see, the designs don't have any very original approach, but I think them may work well.

Your comments are always welcome.
I've been making the last posts trying to fix the issue of multiple blank lines, specially on cell phones. Comment if it still appear on your browser.
Posted by Leonardo Piccioni at 2:44 am 2 comments: Links to this post

Neighborhoods are a common wondering by flag designers [see examples]. The mine haven't a flag, although others in my city do. I had an almost clear idea about what it should be, but it's the first time I "formally" design a flag to it.

I live in a neighborhood (I'll translate "bairro" as this, although "borough" also sounds adequate) called "Cidade Patriarca" (translating, "Patriarch's City"), a proletarian neighborhood in the suburbs of São Paulo, yet too young: it was officially founded only in 1948, when a train station was inaugurated.

Firstly, I'd like the arms to be partly canting, making a tribute to the José Bonifácio, the "patriarch of independence", in effect to his importance in this event. So the flag is green and yellow (more details below). In fact, the anniversary of the neighborhood, September 7th, is also the date of Brazilian independence, and the public schools of the bairro are named after José Bonifácio and the viscount of Cairu (other important politician of the independence time).

It also should have an tree, as one of its key characteristics was being planned (what's an exception), and the large green areas and wide streets are still visible in the landscape. Other feature should be the red color, a reference to the red clay that existed before the region was totally paved: it's very remembered by the oldest inhabitants of the region, specially about how the shoes and pants hems were ruined by red mud after the rains!

My first attempt was the following: 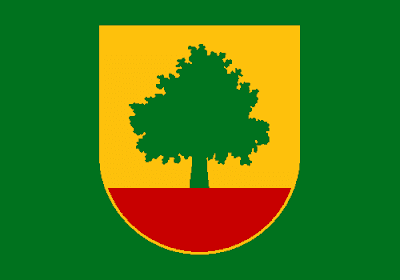 I like how much the design is similar to Brazilian flag, but it's very generic, don't you think? I decided to keep the reference to José Bonifácio clearer. Although he and his relatives denied nobility titles and coats of arms more than once, there's city of Santos coat of arms, white a green and golden bend in reference to José Bonifácio. Based on Santos coat of arms: 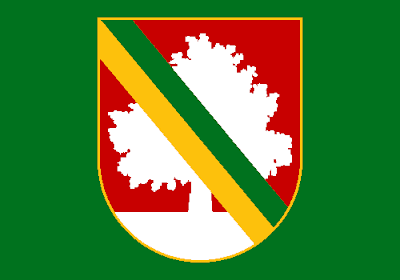 My final design, that I like only a bit more than anterior, has a green tree: 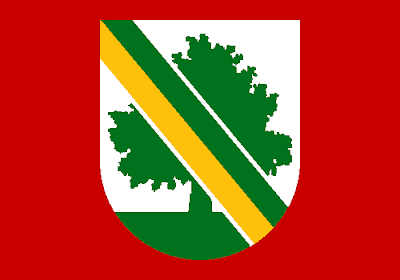 Curiously, I once heard that there was a local football team called "Patriarca FC" (or something like this) whose colors were red (actually, maroon), white and green. Although all designs are good, I think the third is the most appropriate. All of them are based on principles of Portuguese vexillology, followed in many parts of Brazil, but simplified to a more striking effect.

Comments are welcome.
What about design a flag for your local community? If you do it, post a link on the comments.

Posted by Leonardo Piccioni at 3:57 am No comments: Links to this post