Today, it was announced the six finalists to competition that will select the flag of the traditional county of Durham. My entry didn't form the selection of finalists, but I'll post it to spread the word about the competition.

My entry was the following: 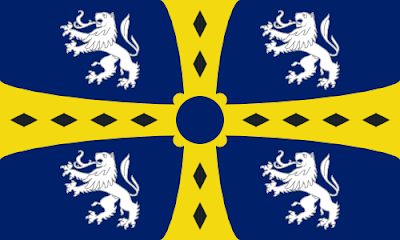 It's based on the coat of arms of the See of Durham. Its relevance is clear: from 13th to 19th centuries, the county was administered as a county palatinate under the figure of the bishop of Durham. The cross was altered to look like the pectoral cross of St. Cuthbert, a local saint of much devotion and historical relevance to the county. The black diamonds (lozenges) were added to the coat of arms granted in 1961, in reference to the famous coal miners of the region; instead of putting four to six big diamonds, I preferred to put twelve smaller ones, to create a more ornamental design. My entry was, actually, an amalgamation between some early designs, that were composed in a layout that I consider aesthetically appealing. Here are some selected drafts:

Although my design wasn't selected, I'm glad that all the finalist flags have similar themes to the mine.

Comments are greatly welcome.
The official voting is open, and you can access it in the link (bottom of the page).
Posted by Leonardo Piccioni at 2:57 pm 3 comments: Links to this post

The upcoming referendum about Scottish independence, to be held in 18 September 2014, has generated a doubt about a possible "rest of UK" flag. While many people say the UK flag won't change whatever is the result, we should be aware of the hypothesis of Scottish leaving the Union and the flag of the remaining kingdom being changed; if it occurs, what should be the best option? 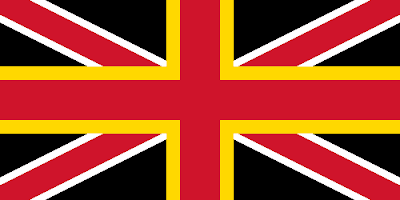 In the Yes-winning scenario, the remaining UK should be constituted of England, Wales and Northern Ireland. While the current flag represents the order of the kingdoms joining the Union, the design in the hypothetical could represent all the constituent countries in same way. The yellow cross on black background represents Wales, the red saltire on red stands for Northern Ireland, while the red cross overall represents the England. If Cornwall eventually become a constituent country, part of yellow fimbriation can be turned white. The saltire is completely red, and not counterchanged red and white like in current flag.

At least two other questions about vexillology can be resultant of the hypothetical scenario: the case of the ensigns and the royal standard.

Ensigns: They don't need to be changed. For this occur, it only needs that, while the national flag is changed, the current naval jack is kept. The now-independent countries that still adopt a British ensign (Australia, New Zealand, Fiji, Tuvalu, Cook Islands) can also keep it for historical purposes.

Royal standard: It could be an excellent opportunity to Wales be represented in UK royal standard. However, its inclusion can be ambiguous, as the Prince of Wales uses the "royal" coat of arms of Wales (as used in Wales and in England and Northern Ireland). Other options are quartering England and Northern Ireland, or marshalling them, for example.

As it's a very complex issue, I invite you to leave your opinion on the comments.
This post is about vexillology, not politics. Comment gently, please.
Posted by Leonardo Piccioni at 5:31 pm 2 comments: Links to this post

My personal coat of arms 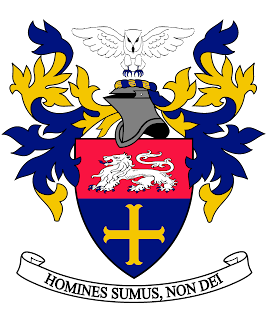 After many tests, I developed a design that passes on test of time, and correct under heraldic rules. It's similar to design above, but with many slight corrections. Here's an emblazonment (depiction) made by myself: 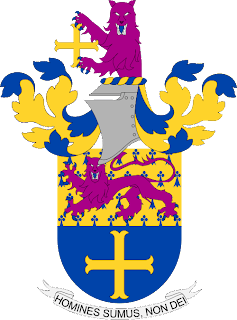 l will explain it by parts (this quick glossary can be very useful):

Escutcheon (shield): Very similar to the draft, but with different chief (superior part). I blazon it this way (other variants are possible):


Per fess Or ermined Azure and Azure, on chief a lion passant guardant Pourpre armed and langued Azure, on base a cross moline Or.

The draft contained a ultra-rare tincture (color) called Amaranth, between the pink and the purple. To avoid it being confused with Gules (red) or Pourpre (purple), I adopted the Pourpre tincture instead.

The escutcheon is round in the bottom, the most used in Iberic Peninsula and Latin America.

The lion is canting or punning ("Leo" is also an abbreviation of "Leonardo") and the lion represents many virtues in most of cultures. The cross moline represents my religion (Christianism) and is also one of the most striking heraldic charges, in my opinion. The ermine spots grants that my design is unique, as they rarely occurs.

Crest: The same lion of the shield, but in a different position, holding the cross moline of the same escutcheon. The owl was removed in name of a more homogene coat of arms. I blazon it as follow:


A demi-lion rampant guardant Pourpre langued and armed Azure, holding between the paws a cross moline Or.

Mantling and wreath (torse): Azure (blue) and Or (yellow), the main dark and light colors of my coat of arms.

Helmet: A gentleman (or commoner) coat of arms, to don't claim honors that I don't possess.

Motto: "Homines Sumus, Non Dei" (translation: We Are Men, Not God). Represents the humility, one of the virtues I value the most, and the sense that we must be strong in all situations.

Standard: A simple banner of arms. The idea is use it in more ceremonial occasions. The ratio of 4:5 seems to a gentleman. 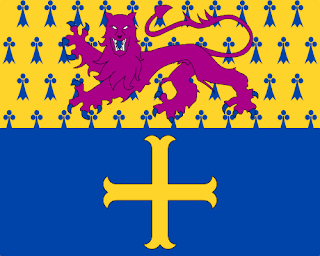 Flag: To be used in less formal occasions. The base of the escutcheon. 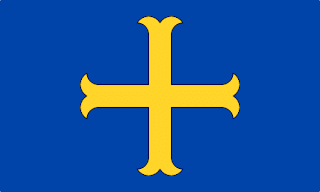 I know that a golden cross moline in a blue background was used in other occasions; for example, a Lord Molyneux used it on English Civil War, although the cross had a less modern design. Where ambiguity can occur, the banner of arms can be used.

Comments, suggestions, requests are all welcome with pleasure.
Very special thanks to Paul James and Samuel McKittrick from Flags Forum, of whom without the advices and guidance my coat of arms couldn't reach such quality.
Posted by Leonardo Piccioni at 5:05 pm 2 comments: Links to this post

Email ThisBlogThis!Share to TwitterShare to FacebookShare to Pinterest
Labels: coat of arms, me

In cricket, many nations of Caribbean compete under "West Indies" umbrella. Most of its members belonged to former British West Indies, although it also includes American and Dutch dependencies. It's formed by six minor associations: Barbados, Guyana, Jamaica, Trinidad and Tobago, Leeward Islands and Windward Islands (the later two subdivided in smaller associations).

The idea of this post is based on the fact that there isn't a representative flag of West Indies. Generally, the flag of the West Indies Cricket Board is used, but it's copyrighted and can't represent the region in a different context. It's WICB flag: 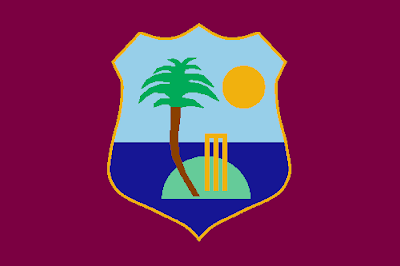 For this purpose, the flag should be as generic as possible, as West Indies area is constituted by countries with their own diversity. But, if possible, it should resembles to WICB logo and, in lesser scale, the West Indies Federation flag. 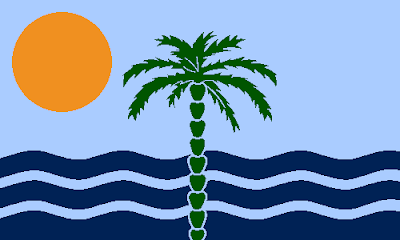 The wavy pattern and the golden disc comes from both the WICB logo and Federation flag. The palm tree is a feature of IWCB logo[ and a well-known symbol of the Caribbean. The sun disc was moved from the right to the left, to form a more equilibrated layout.

This flag can be carried by West Indies fans, included as handmade pieces. There isn't any symbol that attaches it necessarily to cricket, being possibly used in other contexts. And this flag isn't copyrighted and can be customized.

Your comments are welcome!
The blog doesn't have many posts related to Central Americas. I'm accepting suggestions.
Posted by Leonardo Piccioni at 4:59 am No comments: Links to this post