This is the flag: 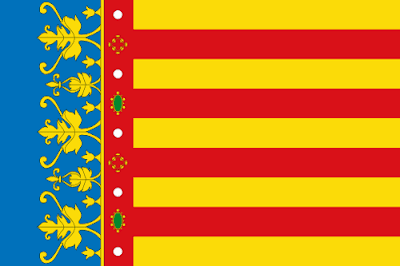 It the senyera of former Crown of Aragon (nine yellow-red horizontal stripes) with a stylized crown, a privilege dating from the second half of 14th century.

My proposal takes the crest from current coat of arms — probably originary from belief that Crown of Aragon's crest contained a bat instead of a wyvern — and puts it on a cairó, a rotated square associated there with civic heraldry. This is the result: 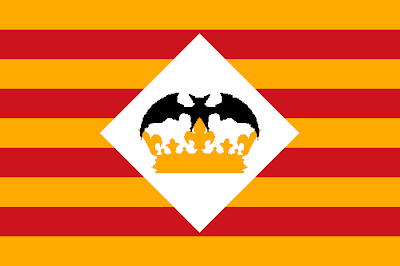 This crest, being golden and black, is very hard to contrast. In my second attempt, I used a more pan-Catalan color scheme: 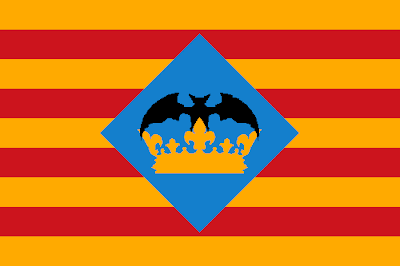 I'm more inclined towards second scheme, but I think Valencian people would be proud of both.

Comments and suggestions are welcome.
Which one of designs do you prefer?
Posted by Leonardo Piccioni at 3:03 pm 2 comments: Links to this post

Orlando, Florida is one of main touristic destinations of the world, being known as "Theme Park Capital of the World" for hosting World Disney World Resort, Universal Orlando Resort, SeaWorld, Gatorland and Wet'n'Wild.

Last week I was travelling there (hence my absence from this blog), but I rarely saw city's flag: 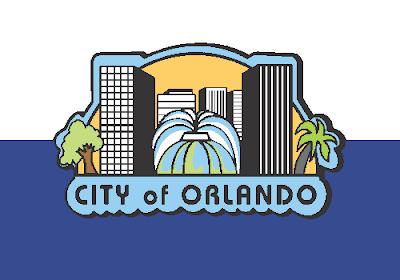 I was wondering if a more emblematic flag would help spreading its usage. Orlando has many iconic postcards, like Cinderella Castle and the Universal Globe, but the flag should countain a neutral symbol that could be flown by any Orlando company without embarassment, so I decided for the fountain of Lake Eola Park, also present in current Orlando flag. It's the result: 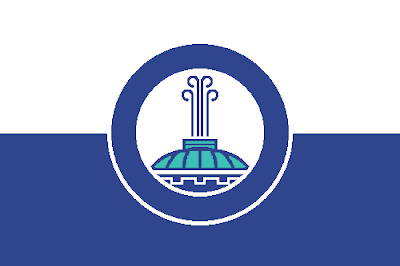 I kept the white-blue bicolor for being a distinctive background. The blue ring forms the letter "O", the initial of "Orlando". Giving the due credit, the fountain drawing was based in a logo by Frank Rodriguez (from MUDSHOCK).

Comments and suggestions are welcome.
I'm sorry for not posting last week, but I hope that this week's inspiration pays off.
Posted by Leonardo Piccioni at 3:36 pm 1 comment: Links to this post

Nepal is the only non-rectangular surviving national flag. Its oddity gathers legions of fans; I'm not one of them. It's an expensive, non-aerodynamic (what makes it inevitably short-lived) flag, and reproducing it in accordance to construction sheet can be a formidable challenge. Proposals of amendment seems to have happened very recently.

This is Nepalese current flag: 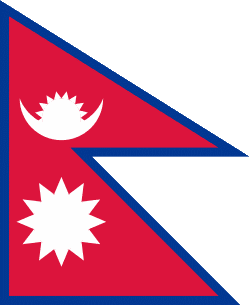 My initial sketch for a Nepalese flag is more than two years older. This is it: 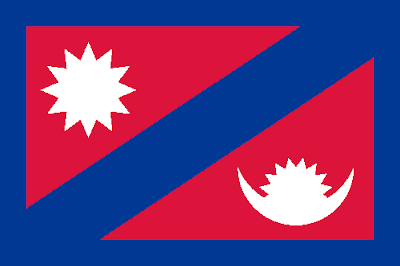 I think that, since all elements are relevant (including the triangles, that, in popular lore, represent the many and notable mountains of the country), I should keep them. I've used the symmetry of flag elements in my favor, arranging the triangles to form a rectangle.

I didn't like the result, because the flag lacked contrast. So I decided to give another try in last days. My first new result was the following: 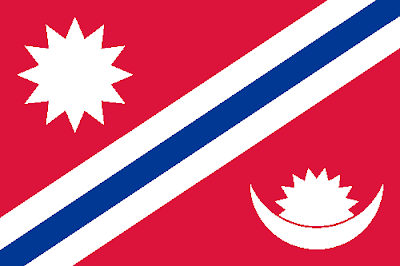 This flag is, from a vexillological point of view, much more effective. For a minor detail, I've added a border outside the crescent moon.

But it didn't shouted "Nepal!", so I inverted the blue and white diagonals. 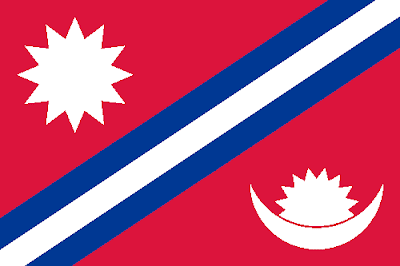 This flag may not be as contrasting as the previous, but I think it's more truer to Nepalese history and more similar to current flag.

Comments and suggestions are welcome.
I want to know: Do you like current Nepalese flag?
Posted by Leonardo Piccioni at 4:09 pm No comments: Links to this post