For today, two cities with very similar flags that gained such the same kind of redesign: Fortaleza (the sunny capital of the state of Ceará) and the worldwide famous Rio (capital of state of same name).

Starting with Fortaleza... This is the current flag: 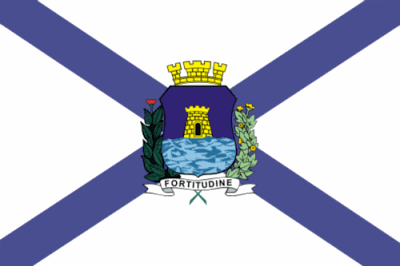 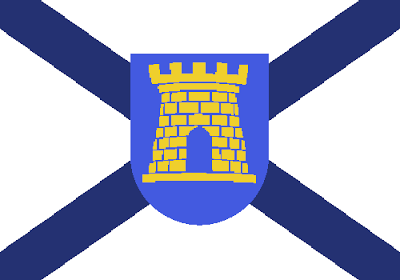 This flag is much simpler and the fortress is more prominent now.

The current flag of Rio, now: 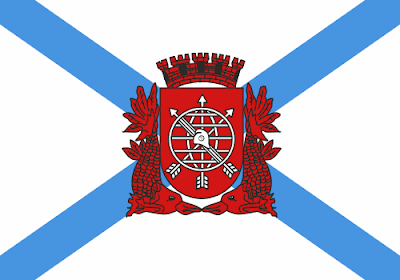 The current Rio flag is very similar to Fortaleza one, isn't it? I could made a nice novel flag, but I think a radical change won't be welcome by local people. The coat of arms depicts an armillary sphere (common reference to Portuguese empire) and three crossed arrows, representing the patron saint of the city, Saint Sebastian. Similar symbols are used to represent the Rio de Janeiro since 1565. For my proposal, I'll remove the Phrygian cap to keep it simpler. For curiosity, compare it to the flag of the former state-city of Guanabara. Here it is: 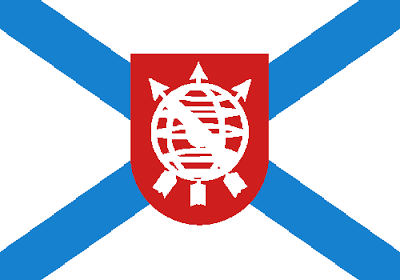 I can't see why this flag wouldn't be well-accepted.

Your comment is welcome. Feel free to comment.
Only ten cities left on the series. Start the countdown!
Posted by Leonardo Piccioni at 3:42 am No comments: Links to this post

Although South Africa has a nice heraldic tradition, its vexillology, specifically in relation to provincial and municipal flags, is still incipient and, in many cases, disappointing.

Look at the flag of Cape Town, one of the few you'll find: 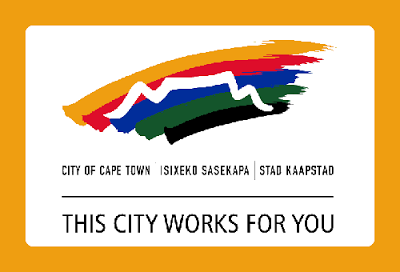 This flag depicts a white stylized Table Mountain (a tourist attraction of the town), some kind of rainbow connected to South African national flag, and a lot of things improper to a flag.

I still prefer the design used before 1997: 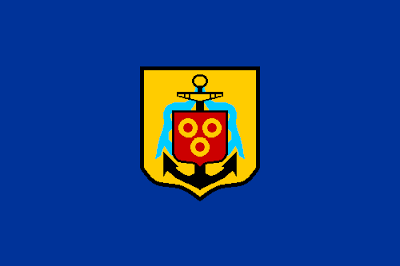 This flag depicts the newer the old coat of arms of the city (it was abandoned when the flag changed, but none design was granted since then) on a blue background. The coat of arms consists in a yellow shield, with a black anchor (in reference to the fact that Cape Town is one of most historically important ports in the world, because of its strategic position on the Cape of Good Hope) and an inescutcheon with the arms of Jan van Riebeeck, a Dutch administrator of the area, consisting on three golden annulets on a red field.

My proposal takes the most substantial symbolism but rearranges the elements in a more pleasing design: 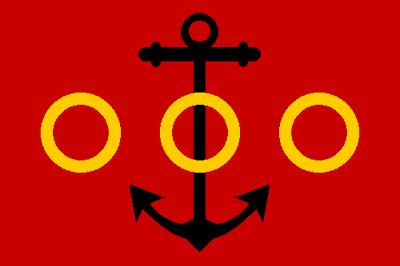 The three annulets are in a different disposition but, actually, can be blazoned as the same. Although black anchor in red can ignore the rule of tincture in many traditions (including the South African), the contrast between these colors isn't considered an issue (look, for example, to Albanian flag). This flag holds a harmony between the vertical and horizontal axes, slightly resembling a cross arrangement.

Your comment is welcome. Feel free to comment.
Next week, the Brazil capital series appear again.
Posted by Leonardo Piccioni at 5:49 am No comments: Links to this post

Provo, Utah is one of most dynamic city of USA, and is well-quoted in many national rankings. However, its flag is between the worst of the country [see a ranking]. 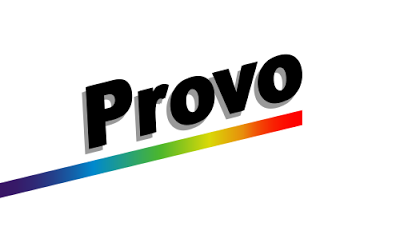 So, city mayor wrote a post on his blog asking for suggestions to a new flags. Looking at comments, I noticed that Provo inhabitants like very city's logo:

It isn't a good idea to put the logo integrally on the flag because letters should be avoided. Logos usually aren't a good idea neither, but we hope this logo won't change anytime soon. My suggestion: 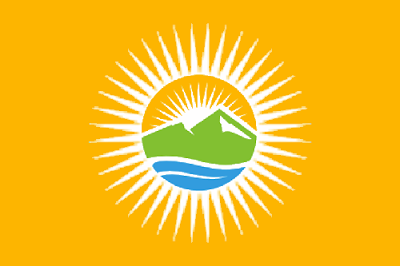 Yes, the sun is duplicated, but I think this design potentialize all the good things of Provo.

Your comment is welcome!
You can post your own proposal on mayor's blog. Why don't you try?
Posted by Leonardo Piccioni at 9:27 pm 2 comments: Links to this post

I recently showed a flag proposal to incentive the debate about a possible new Brazilian national flag. If you want to know the reasons why the debate is interesting, click on original post.

Below, you can see, respectively, current Brazilian national flag and my first proposal: 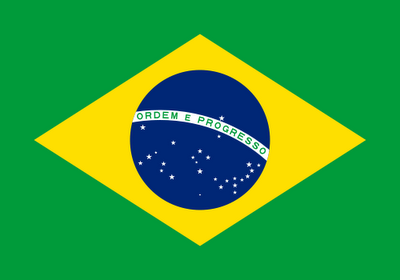 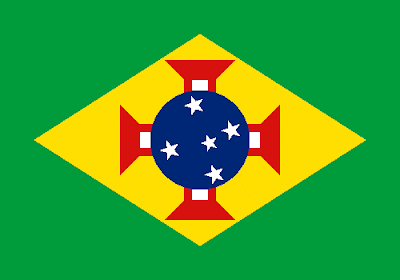 My newest proposal is, in certain way, derivative of the flag Brazil used during monarchy: 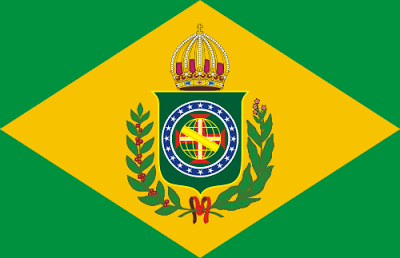 I'm not a great fan of imperial coat of arms for a couple of reasons: it's very complex, the green shade is too dark, the tobacco branch doesn't represent Brazilian history, it needed to be changed every time a new province was created, etc. Moreover, it's impractical since the country became a republic, because of the crown. My proposal, reworking previous flag, is the following: 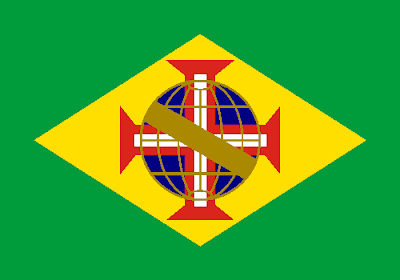 The armillary sphere and the cross of the Order of Christ have long being associated with Brazilian iconographic history. The blue circle is blue, with an allusion to current flag and to the flag Brazil used during the United Kingdom with Portugal and Algarve. The flag now has red, the color of the tincture of the brazilwood, the tree that gives name to Brazil.

For the fans of the lozenge occupying the whole plan: 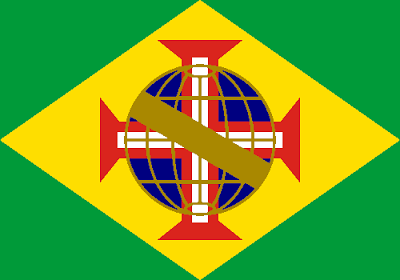 It's important to notice that, although this flag is a little complicated to being drawn, the current one is worse: it's much more difficult to draw 27 stars, each one with its correct size and position, while the proposal has a logic infinitely easier to be remembered. Moreover, this proposal is only a prototype, and can be simplified in other occasion.

Your comment is welcome!
If you have a favorite Brazilian flag proposal, by you or whoever, fell free to post it on comment.
Posted by Leonardo Piccioni at 4:43 am No comments: Links to this post