Cabinda is a province that happens to be an Angolan pene-exclave (three fourths foreign lands, one fourth the sea). It's an area of conflict between Angolan government and secessionists, that believe that, in the terms of the Treaty of Simulambuco and other documents, although de facto administered as part of Angola it was a de jure separate subject to Portuguese republic before Angolan independence.

As far as I know, there isn't a Cabinda flag. Those flags one can find actually pertain to certain to those secessionist movement. So I decided to create a flag that represents Cabinda uniqueness, but as neutral as I could.

My inspiration for this flag is the Monument of Simulambuco, located where the treaty of same name, incorporating Cabinda as a then-Portuguese Crown's protectorate. 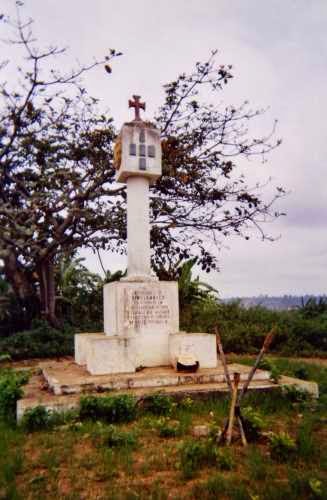 The three spears in front of it represent the kingdoms of Kakongo, Loango, and N'Goyo. I incorpotated them in the flag, but in a different way: 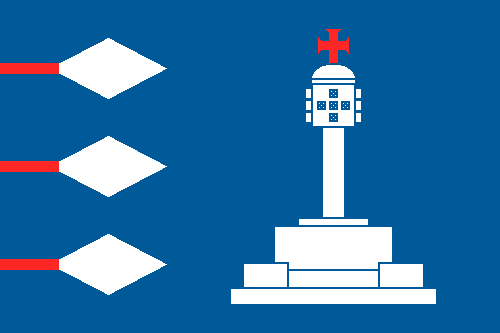 The blue color represents the Atlantic Ocean. The design could be mirrored, if one prefer: 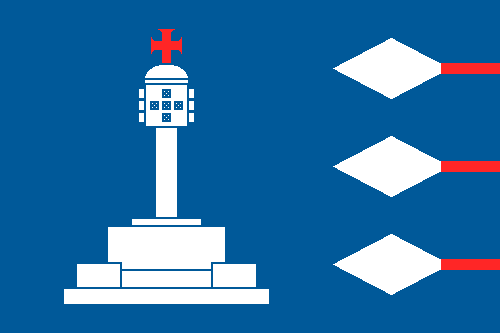 I like the visual experiment with the arrows. The result is surely striking.

Comments and suggestions are welcome.
Sorry for the delay, again.
Posted by Leonardo Piccioni at 2:11 pm 1 comment: Links to this post

When Vancouver Island was granted a flag, in 1865, it was still an independent colony. The next year, though, it joined British Columbia, now part of Canada, so there's doubts that flag ever flew those times.

That flag, however, is been revived by many locals as an unofficial flag. This is how it looks: 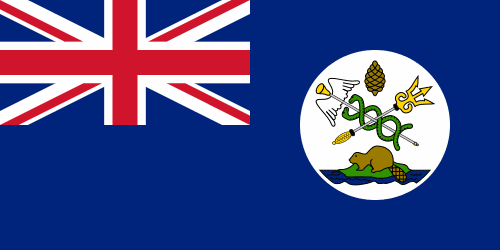 It's a bunch of things happening there. The badge is based in then-colony's seal:trident for the sea surrounding the island, caduceus for commerce, pine cone for the forests and beaver for fur trade. I don't think the blue ensign-look is the ideal for current usage. 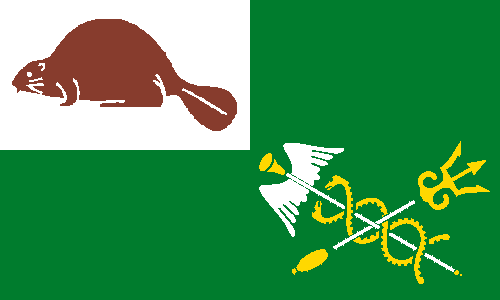 I kept the main elements of the flag. Caduceus and tridents, here. The green stands for the forests. The beaver is on canton because, apart from the fur trade, it's also representing the Hudson's Bay Company, the true proprietors of former colony.

My second attempt is more conservative: 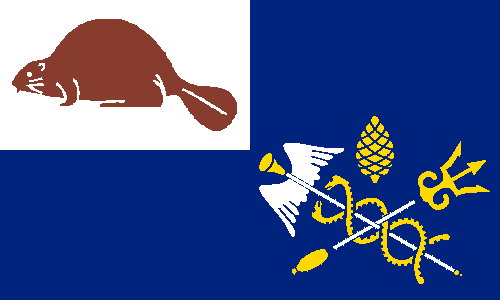 Nothing completely original, but this flag is way more ellegant and easier to be manufactured.

Comments and suggestions are welcome.
My real sorry for post's delay. It's been a busy week.
Posted by Leonardo Piccioni at 2:03 pm No comments: Links to this post

The Organization of American States (OAS or OEA) is an international organization consisting in all independent countries of the Americas (Cuba is not active member).

Its flag is similar to the following: 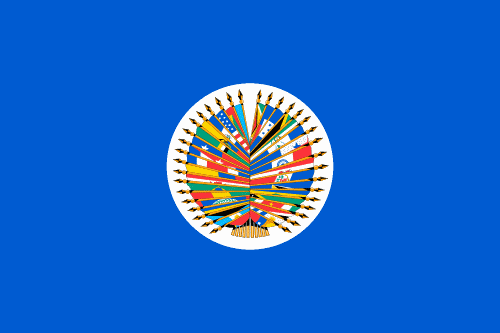 It contains OAS' logo (pieces of the flags of the member states in a flagpole) in a blue background. I consider this design cluttered and lazy.

I came up with a proposal of my own, just to discover that Flags Forum's user Smertios had a similar idea much earlier: 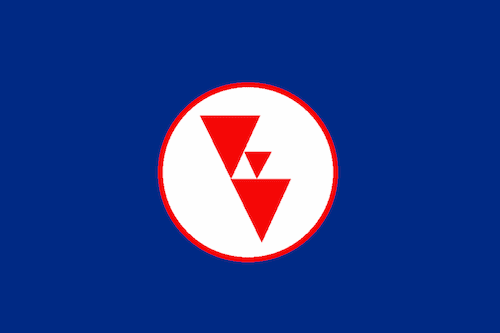 I think the idea of an stylized map is clever, but I'm not happy with its (possibly unintentional) similarity with logo of FTAA, a proposed pan-American (except Cuba) free-trade area.

My actual design, developed independently, is the following: 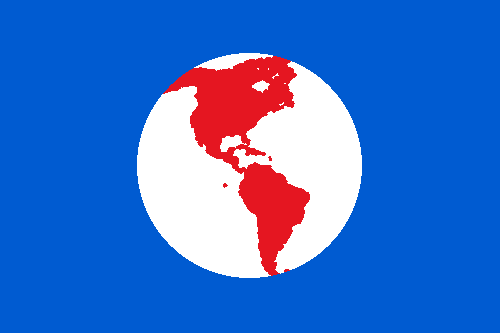 I kept the basic white-circle-on-blue design, but thought the circle like a globe. I painted the continent red because it's a color widely associated with American continent e.g. the former rationale for Olympic red ring.

Comments are welcome.
I tried to make this post the most apolitical.
Posted by Leonardo Piccioni at 2:40 pm No comments: Links to this post

The flag of Birmingham has its use restricted to official use only, so the Birmingham City Council decided to open a contest for choosing a "community flag", for less restricted use.

This is council's flag: 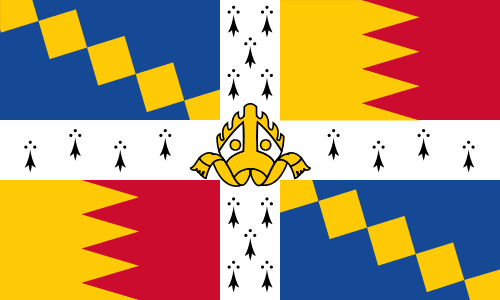 It's a banner of council's arms, whose symbolism can be better explained here: 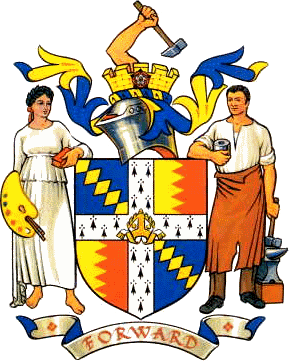 Analyzing local heraldry, I found that the most used elements was the bend of lozenges. It would finally become the basis for my proposed flag. The city's coat of arms focuses in Birmingham's importance at industry, arts and learning.

So my first idea for a flag was the following, with a gear for industry, a brush for arts and a feather for education: 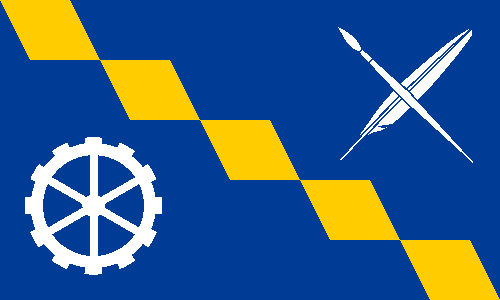 But I think it wasn't a very effective design, so I replaced brush and feather for the sun, whose symbolism can be better expressed in my rationale. This was my entry in the contest: 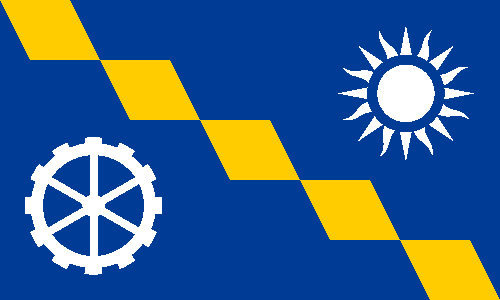 I submitted the following rationale:


The flag is inspired by the original coat of arms of De Birmingham family. The gear represents Birmingham's industry. The sun is the source of light, representing city's importance in Arts and Education, as well as its role in Midlands Enlightenment. The golden diamonds also stand for Jewellery Quarter.

Now it's just hope that any good entry win the contest.

Comments are welcome.
Sorry for the unconventional delay. I had to assure the contest was closed and gone through technical problems.
Posted by Leonardo Piccioni at 2:56 pm No comments: Links to this post