The then pope emeritus Benedict XVI was the first pope to have ever resigned since 1415. A new question was arose: how should be the coat of arms of a pope emeritus?

It's the coat of arms of Benedict XVI while still pope (and possibly still in use): 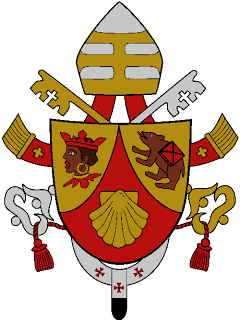 The external ornaments used are on this coat of arms are:
As much of the above ornaments may not be correctly attributed to a pope emeritus, a proposal by cardinal Andrea Cordero Lanza di Montezemolo, the same author of the coat of arms of Benedict XVI as a pope, was saw on the media: 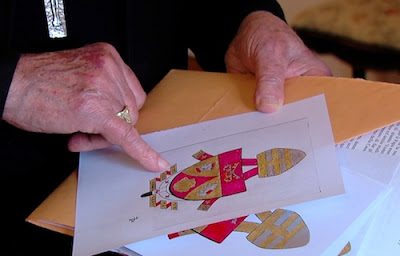 I'm not particularly keen of the cardinal's design. The pallium is never used by an archbishop emeritus, and naturally shouldn't be used by a pope emeritus. Moreover, I don't think that the red chief integrates well with the rest of the the shield. Here's my proposal. 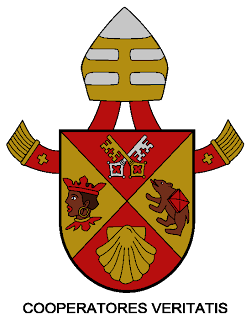 For the reason cited on previous paragraph, I don't think it's a good element to the coat of arms, with the additional reason that it doesn't combine with a round shield, that was preferred. The mitre can stay, as a consecration lasts all the life; even though the mitre is very similar to a papal tiara, it's still a mitre, and can be used as a special honor.

The papal keys are removed from the background and kept on the chief, as an honor, but, differently of cardinal's proposal, I kept the whole design in a way that could be traditional but still resembling current coat of arms. So I opted by the partition in saltire, that seems a sharp option for a now-quartered shield. The motto that was, for unknown reason, dropped from papal coat of arms can return.

Your comments are always welcome.
As religion is a very sensitive theme, I'd decided to write this post in a technical perspective. Prejudiced comments won't be allowed.
I'd like to put the motto on a scroll, but my artistic abilities didn't allow me to do so.
I like very much to write about heraldry! If this post have a good response, I'll write more about the theme.
Posted by Leonardo Piccioni at 4:58 am 2 comments: Links to this post

Aracaju is the capital of the state of Sergipe, in the northeast of Brazil. Just for curiosity, it's considered the healthiest capital of Brazil: more bikes and less smokers.

Here's the flag of Sergipe: 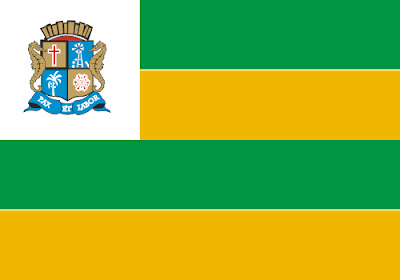 If you're not familiarized to Brazilian flags, you may not have noticed that this flag is heavily based on the Sergipe state flag. The coat of arms says very few about the city: the cross and the gear have obvious symbolisms, the other two quarters represent the importance of the salt and coconut to local economy (although the city isn't very known by it).

Aracaju etymology means "bird's cashew". The city is commonly known as the "City of the Cashew" and there are references to the fruit everywhere around the city. So my proposal is keep the current pattern, pick it less similar to Sergipe state flag and add a cashew. Here is it: 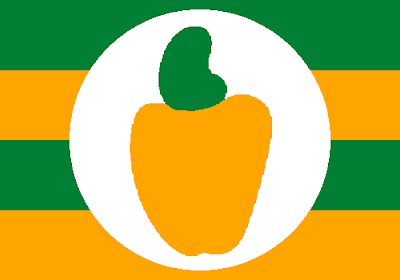 Initially, I rejected the flag for being too "direct to the point", but I think its cleverness has grown on me. If you want, you can consider that the white represents the salt, green the coconuts and yellow for the wealth of its urban center, and then you have made a parallel to the city's coat of arms.

Your comments are welcome.
The flag series is very near the end: only six flags left!
Posted by Leonardo Piccioni at 3:50 am No comments: Links to this post

My flag proposal to Gaza strip is inspired by the flag of Gaza municipality, the biggest city of the strip. 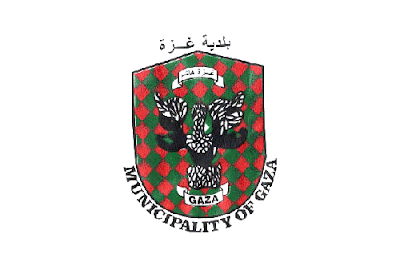 The flag is a plain field (in many different color variants) with the municipality coat of arms, consisting of checkered red and green and a phoenix (representing the many rebirths of the city along the history). Here's my proposal: 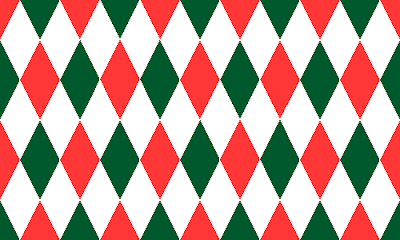 The red and green lozenges are intercalary with white ones, representing the peace and the future to be written. I don't know if a flag based on a municipality's is adequate, but this design is, for sure, striking.

Your comments are welcome.
But, please, don't forget that the this isn't a post about politics or so, but only vexillology.
Posted by Leonardo Piccioni at 3:42 pm No comments: Links to this post

In many countries, it's very common to war veterans fly flags related to the war he participated. I've never saw something similar in Brazil, but I estimate hundreds or thousands of soldiers of WW2 are still alive. What I'll comprehend on this post, however, is a flag to be used by the families of all the soldiers that fought on the war, including those that died on battle.

All the Brazilian soldiers in WW2 where organized under the FEB (Brazilian Expeditionary Force). Its patch was formed by a snake with a pipe on the mouth, in reference to a flag (sometimes attributed to Hitler) that "it is more likely a snake to smoke than Brazil to go to war": 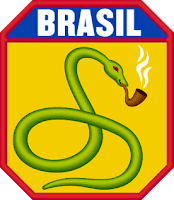 This badge is sometimes used, on a white field, on flags of veteran societies. I suggest something along those lines: 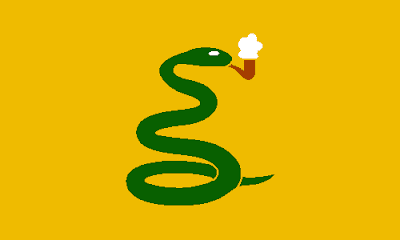 The smoking snake gains a treatment that resembles very much the original patches. This design could be distributed by the veterans societies or the Armed Forces, for example.

Your comments are welcome. Feel free to comment.
It's only a creativity exercise, no non-vexillological statement intended.
Posted by Leonardo Piccioni at 6:16 pm No comments: Links to this post