One of my designs was selected as finalist to the contest for a new Cambridgeshire flag! Today, I'll talk about its creation process and why I think it's an ideal flag for the county.

The contest's rules permitted me to submit two entries. My first, that wasn't selected, is the following: 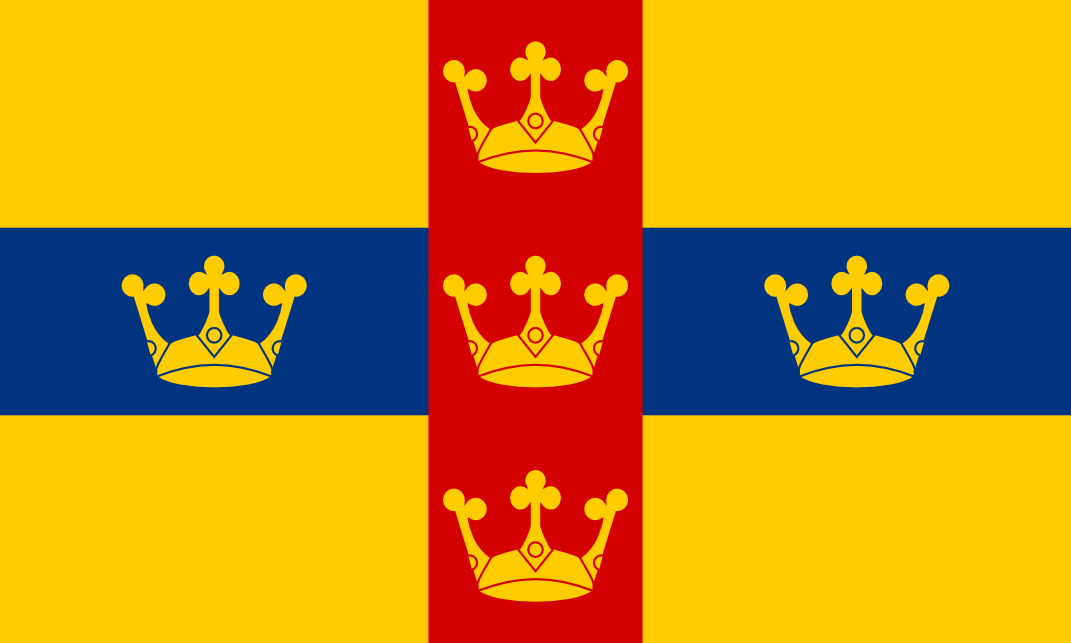 The blue stripe represents the river Cam and, together with the red stripe placed like a bridge, is a pun on Cambridge name. The three Saxon crowns on red is took from the coat of arms of the Diocese of Ely, and the three crowns on blue are the coat of arms of East Anglia. The yellow background represents the county's fenlands, and keep the recommendation of using a maximum of three colors.

My second design, that I made in a fast but determined way, is a derivative of the first, but with a better realization. That was selected as a finalist: 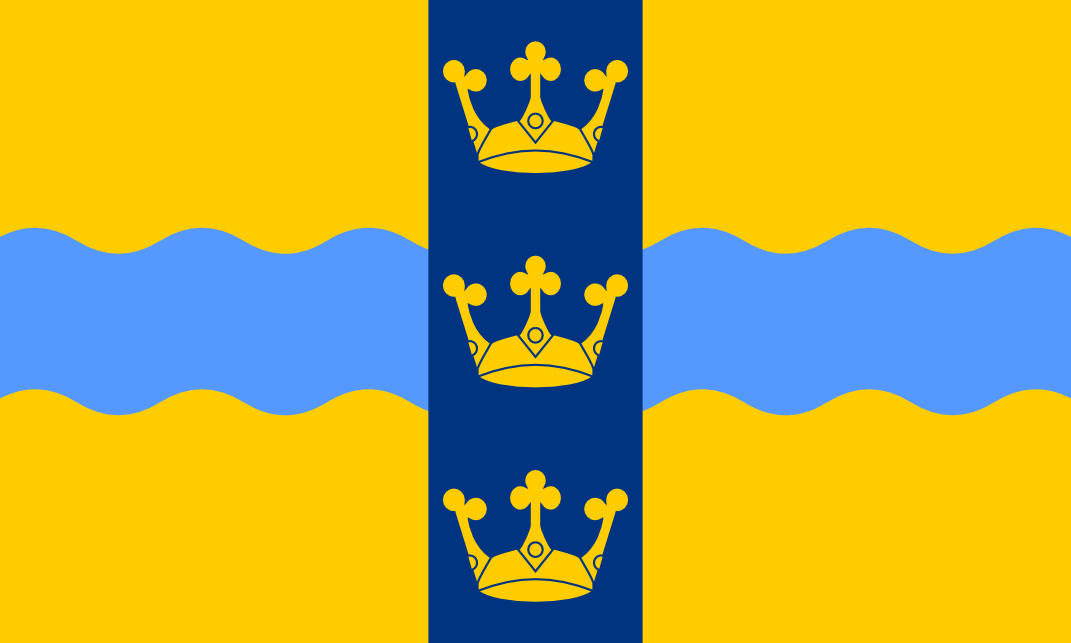 The symbolism of the former was kept, but with many improvements: the crowns are now three, in a more direct counting; the river gained some life, with the waves, and was colored in a shade near "Cambridge blue", the color of the traditional University of Cambridge. It represents county's landscape, history and prides in a very ellegant way.

Comments are welcome.
You can vote in your favorite design in the end of this page.
Posted by Leonardo Piccioni at 11:34 am 2 comments: Links to this post

An anonymous commenter recently asked about my view on a hypothetic flag for an independent Hong Kong.

Firstly, let's face the flag issue... This is the current flag of Hong Kong: 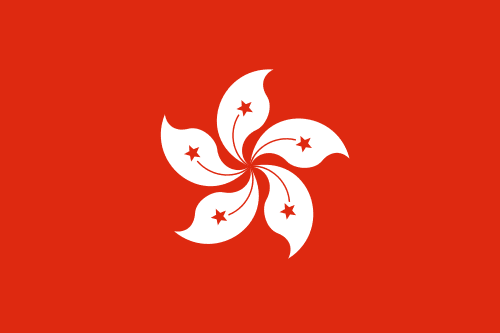 In my opinion, it's a very good flag. But the red background and the five stars are clearly taken from People's Republic of China national flag. Before 1997, when Hong Kong was still a British colony, it used the following flag: 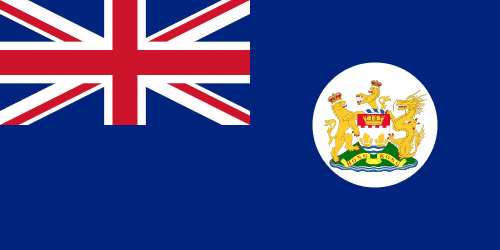 A number of photographs show a flag used by pro-autonomy or pro-independence protesters consisting of the British-age coat of arms, in blue background, with "Hong Kong" witten in Chinese ("香港"): 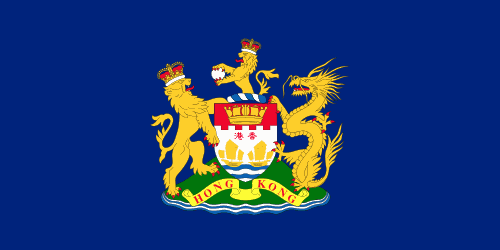 A former proposed flag of same movement is the following: 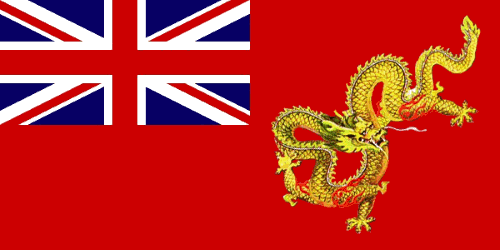 The fact that some groups are now avoiding directly British symbolism (the Union Jack) is a point I took to design my proposal below, admittedly inspired by Qing flag: 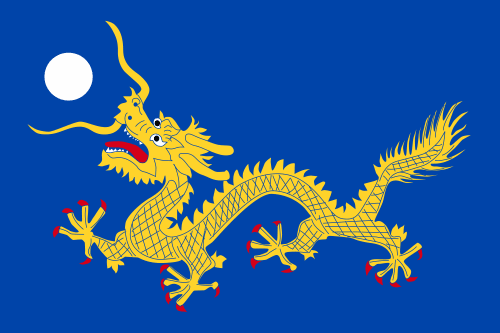 The blue background represents the British past and the port of Hong Kong. The dragon (and the red details) shows the Chinese culture of the region, and its golden color stands for the financial importance of Hong Kong for the world; notice it appears in the last three flags I showed. The white disk, apart from the rising sun, represents the nickname of "pearl of the Orient" given by the British and present in the coat of arms they attributed to there.

It's, obviously, only one of many paradigms one could take to create such flag.

Comments are welcome.
Notice I tried to be the most politically-neutral I could.
Posted by Leonardo Piccioni at 4:07 pm 4 comments: Links to this post

I've been reading the list of sister cities of my hometown, São Paulo, Brazil, and I noticed some of them don't have official flags. One of them is Montevideo, the capital of Uruguay and one of the best cities in Lati America to live.

The city, however, has a coat of arms, that appears in the second quarter of the Uruguay's. A previous version contained olive crowns, British colours in the floor, etc. in reference to the decisive participation of the city in the siege of Buenos Aires. The current version, simpler, is the following: 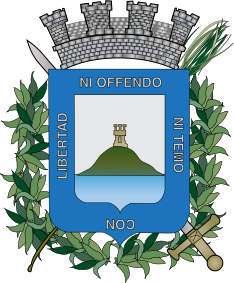 The shield contains a view of the Montevideo hill (cerro) with the respective fortress, now named General Artigas, with a view of the River Plate (Río de la Plata). The shield also reads "Con libertad, ni offendo ni temo", a famous quote by general Artigas that means "With freedom, I neither offend nor fear".

My interpretation of the coat of arms into a flag is the following: 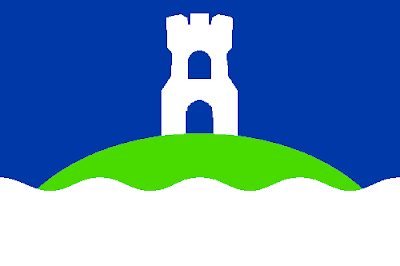 My personal touch was making the river white, a refence to the Río de la Plata, whose name means, literally, "silver's river". The shade of blue is the same of Uruguayan flag.

Comments are welcome.
Sorry for the delay posting this flag. I was busy this week.
Posted by Leonardo Piccioni at 1:44 pm No comments: Links to this post

Today, I'll give my proposal to a possible new flag to Bangladesh. It's a very simple and meaningful flag, but I think the colors lack contrast, as you can see in the image below: 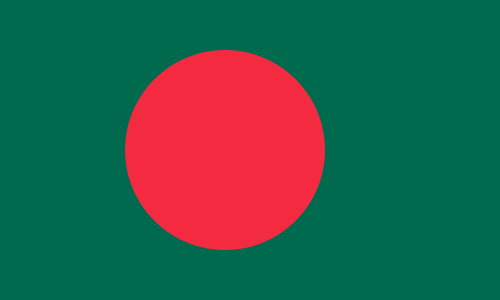 The red disk represents the sun and the blood shed for the independence. The green background represents the lush nature of the country. The golden yellow was present in the former flag of the country, so I decided that it could be a good color to divide the red and the green. 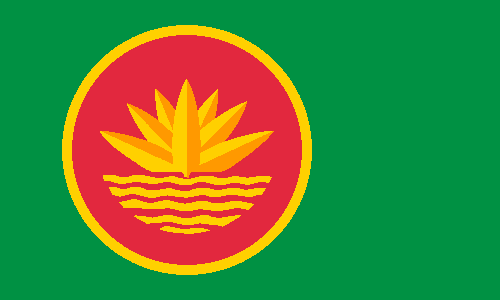 I also added some elements from the country's "emblem": the water lily, the national flower, and the wavy stripes, representing the many rivers of the country, that are also much important to Bangladesh's economy.

Comments are welcome.
Suggestions for new posts, etc. will be gladly received.
Posted by Leonardo Piccioni at 4:51 pm 3 comments: Links to this post